Anamorphic Prism Pairs could be used in Variable magnification along one axis, Collimating elliptical beams (e.g., laser diodes), Converts an elliptical beam into a circular beam by magnifying or contracting the input beam in one axis.

The principle of beam shaping with anamorphic prism pairs is not based on focusing effects (i.e., changes of wavefront curvature), but rather on changes of the beam radius for refraction at flat prism interfaces. Such changes occur at the interfaces of any prism (except for normal incidence), because the angle of the beam against the surface-normal direction is different inside and outside according to Snell’s law (see the article on refraction). However, for a symmetric beam path, where the beam angles against input and output face of the prism are identical, the two changes in beam radius cancel each other. Therefore, one has to use an asymmetric configuration .

An anamorphic prism. The output beam is narrower than the input beam.

It can be convenient, for example, to have normal incidence (or some small angle) at one interface and Brewster’s angle at the other one; that requires an angle between the prism surfaces which equals the internal angle of refraction. Only the former interface (with normal incidence) then requires an anti-reflection coating; the losses on the Brewster interface are minimized for p polarization. In the described configuration, the demagnification factor (ratio of output to input beam radius) of a single prism is equal to the inverse refractive index of the prism material, or the inverse of that for the other orientation. If a prism material with suitable refractive index for the wanted magnification cannot be found, one may arrange the prism for different input and output angles.

An average throughput of 95% can be achieved if the prisms are oriented such that the incident light enters the prism pair at Brewster’s angle and each surface has the appropriate AR coating for the wavelength of the incident light. Please note that the maximum input beam width is 90% of the prism width. For the mounted prisms, the maximum input beam height is given by the entrance opening height. 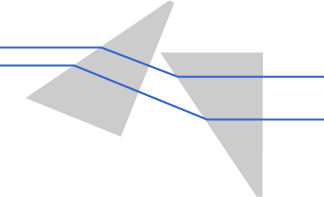 An anamorphic prism pair with refractive index of 1.5, where Brewster’s angle is used on one side of each prism, and normal incidence on the other one. Two parallel beams passing through the prisms are shown. Their distance changes, and likewise their beam radii in the direction of the plane are changed. The prism pair thus works as a beam expander if the input beam comes from the left side. Of course, the beam radius in the direction perpendicular to the drawing plane is not changed.

A single prism is sufficient for changing the beam radius in one direction, but it also changes the beam direction. By using an anamorphic prism pair, one can obtain an output beam with an unchanged direction, only a position offset. The two prisms are of course oriented such that they change the beam radius in the same direction. The overall magnification is then the square of the refractive index, or the inverse of that. If the mentioned beam offset also needs to be avoided, one may use a combination of four prisms.

Anamorphic prisms can be purchased as single items, but also as mounted and properly aligned prism pairs. One may, for example, have a cylindrical package containing a prism pair and being easier to mount in a setup than it would be when using separate prisms. There are also setups with rotatable mounts, where the prism orientations can be precisely realigned by the user.

Due to chromatic dispersion of the prism material, the beam deflection angles of a single prism as well as of a prism pair are somewhat wavelength-dependent. This dispersive effect might be detrimental in some applications. This effect in addition to the limited bandwidth of anti-reflection coatings limits the range of operation wavelengths.

Note that astigmatism e.g. of beams from laser diodes can not be corrected with an anamorphic prism pair, as it does no focusing. (For that purpose, one could e.g. use precisely positioned cylindrical lenses.) On the other hand, it can be advantageous to have a setup which cannot introduce astigmatism – other than e.g. the combination of two lenses, which is an alternative realization of a beam expander. Another advantage of the anamorphic prism pair over a pair of cylindrical lenses is that the transverse positioning is much less critical.

Beam shaping can also be accomplished by using cylindrical lenses, which provide one-dimensional shaping of a beam.

If you need more info, please contact us @contactsg@shapeoptics.com, or Wechat: Shapeoptics 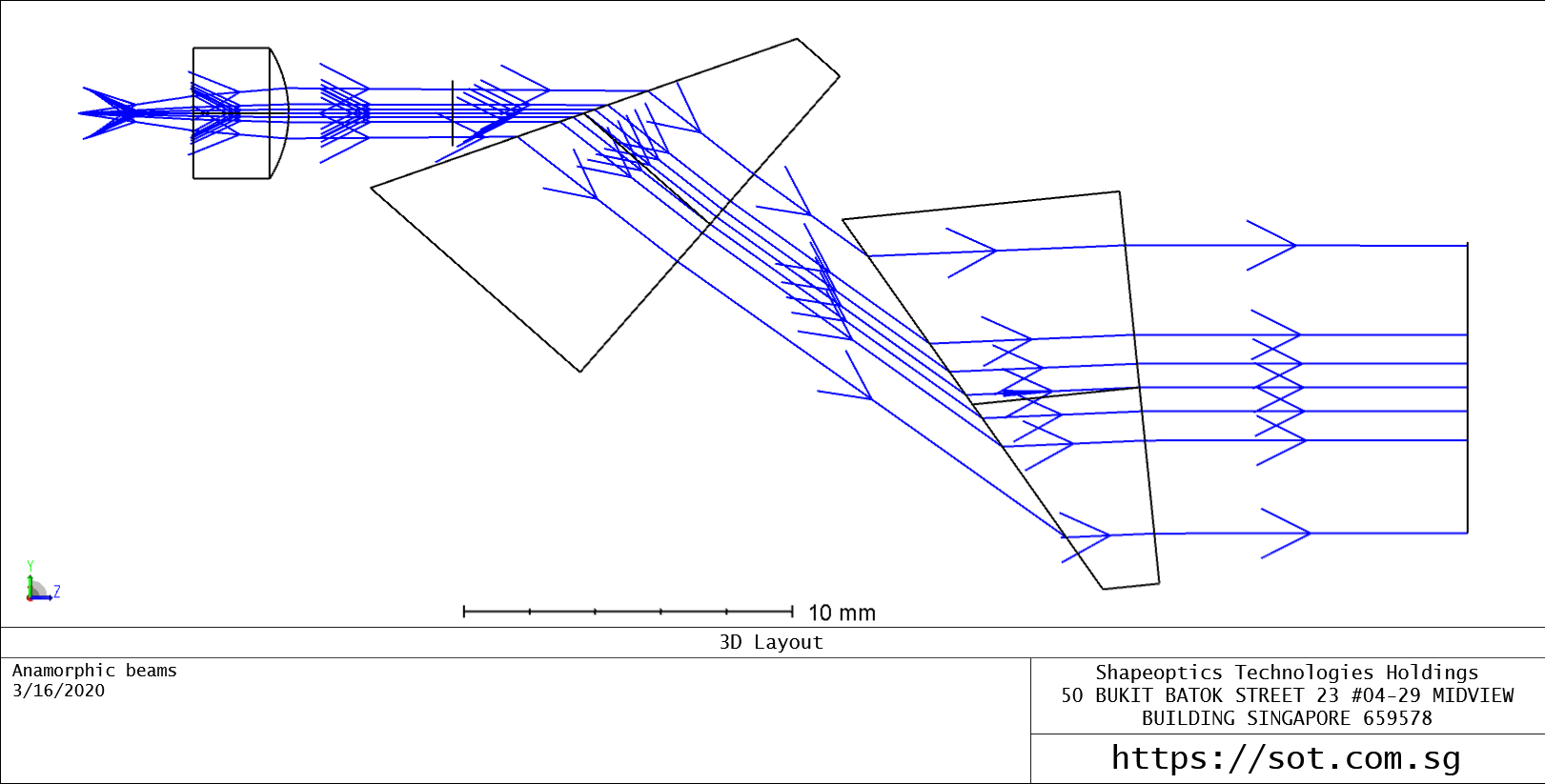 The material used in this knowledge sharing, is only for research, academic, non-profit educational or personal use, the blog owner has strived to credit the original sources, but cannot warrant the accuracy of copyrights or completeness of the information sources.