What is a laser?

LASER stands for Light Amplification by Stimulated Emission of Radiation. A laser is a device which produces highly directional light. It emits light through a process called stimulated emission of radiation which increases the intensity of light.

On the other hand, the light waves of laser light have only one wavelength. Hence, all the photons emitted by laser light are in phase. Thus, laser light is coherent.

The light waves from laser contain only one wavelength or color so it is known as monochromatic light.

The laser beam is very narrow and can be concentrated on a very small area. This makes laser light highly directional.

The laser light spreads in a small region of space. Hence, all the energy is concentrated on a narrow region.Therefore, laser light has greater intensity than the ordinary light.

Lasers are classified into 4 types based on the type of laser medium used:

A solid-state laser is a laser that uses solid as a laser medium. In these lasers, glass or crystalline materials are used.

Ions are introduced as impurities into host material which can be a glass or crystalline. The process of adding impurities to the substance is called doping. Rare earth elements such as cerium (Ce), erbium (Eu), terbium (Tb) etc are most commonly used as dopants.

The first solid-state laser was a ruby laser. It is still used in some applications. In this laser, a ruby crystal is used as a laser medium. 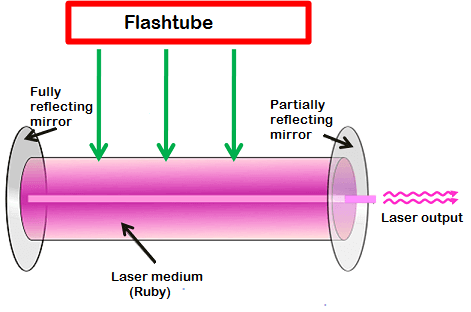 Semiconductor lasers do not belong to this category because these lasers are usually electrically pumped and involve different physical processes.

A gas laser is the first laser that works on the principle of converting electrical energy into light energy. It produces a laser light beam in the infrared region of the spectrum at 1.15 µm.

A dye laser is made up of an organic dye mixed with a solvent. These lasers generate laser light from the excited energy states of organic dyes dissolved in liquid solvents. It produces laser light beam in the near ultraviolet (UV) to the near infrared (IR) region of the spectrum. 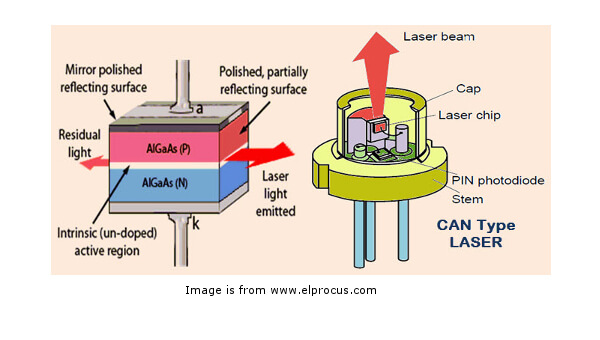 The material used in this knowledge sharing, is only for research, academic, non-profit educational or personal use, the blog owner has strived to credit the original sources, but cannot warrant the accuracy of copyrights or completeness of the information sources.

1 thought on “Types of lasers”